Stations of the Cross

Stations of the Cross in the Ethiopian Iconographic Tradition

The rector in 2017 commissioned D.C. Christopher Gosey of Manchester, New Hampshire, an African American iconographer in the Ethiopian, Byzantine, and Russian icon traditions, to write new icons in the Ethiopian tradition. It took 18 months for Christopher to complete the Stations of the Cross.

Stations of the Cross are visual representations of fourteen stops or stations of Jesus as he journeyed to the cross.  Saint Ambrose first installed Stations in the mid 1980s when a parishioner who was a wood worker made the frames. The parishioner chose lithographs by the 20th century Italian artist Giuseppe Vicentini, a popular visual representation of the Stations. The images had faded and come under disrepair after 30 years. There was a tremendous disconnect between the images of a blond haired, blue eyed Jesus depicted in the Stations and the Black parishioners.

One parishioner in 2016 donated funds to the church to purchase Stations of the Cross depicting people of African ancestry.  The church’s worship committee spent one year searching online and visiting stores to find diverse Stations.  After not finding any Stations satisfactory, the rector reached out to Gosey to write the Stations in the Ethiopian tradition.

Icons are painted prayers. The colors, faces, movement, and background all communicate something about God. Icons are a window into heaven. One looks through the icon into heaven. Ethiopian Christianity is an ancient form of the Faith, representing what the rector calls “Indigenous African Christianity,” which is Christianity in African before European colonialists and slave traders. Saint Ambrose is the only church in the world that has Stations of the Cross in the Ethiopian tradition since Stations are a part of Western Christianity and not a part of Ethiopian spirituality.  Many of D.C. Christopher Gosey’s icons were original creations.

Worship is at the heart of Saint Ambrose. Worship is giving divine honor and praise to God. There are two Sunday morning worship services with Holy Communion. The Contemplative Mass is a quiet, meditative Sunday worship service at 8:00 am with prayers, scripture readings, and a sermon. The 10:15 am Holy Eucharist is a service of prayers, scripture readings, sermon, and Holy Communion featuring the St. Ambrose Choir and musicians leading music from diverse and rich musical traditions. The 12:15 am Wednesday Midweek Mass is a Communion Service with healing prayers and anointing with Holy Oil.

Jesus is Condemned to Death 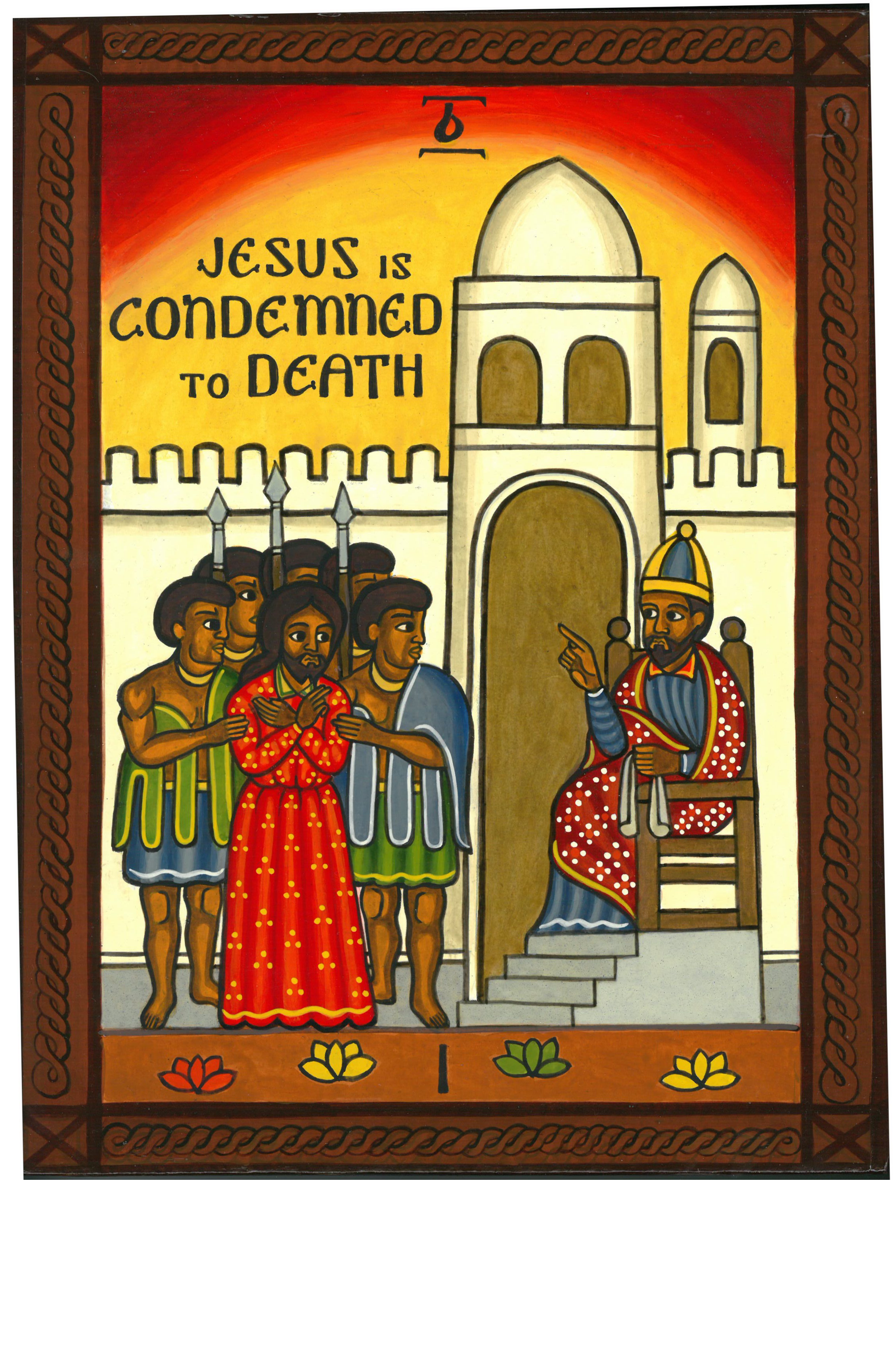 Eyes are important in Ethiopian iconography. Seeing both eyes communicates a holy, righteous person. Seeing only one eye communicates an adversary to God. The first Station of the Cross is Jesus is Condemned to Death. The soldiers have only one eye visible. Jesus and Pilate have both eyes visible. Gosey explains Pilate as having both eyes visible because he repented when he washed his hands in Matthew 27:24. 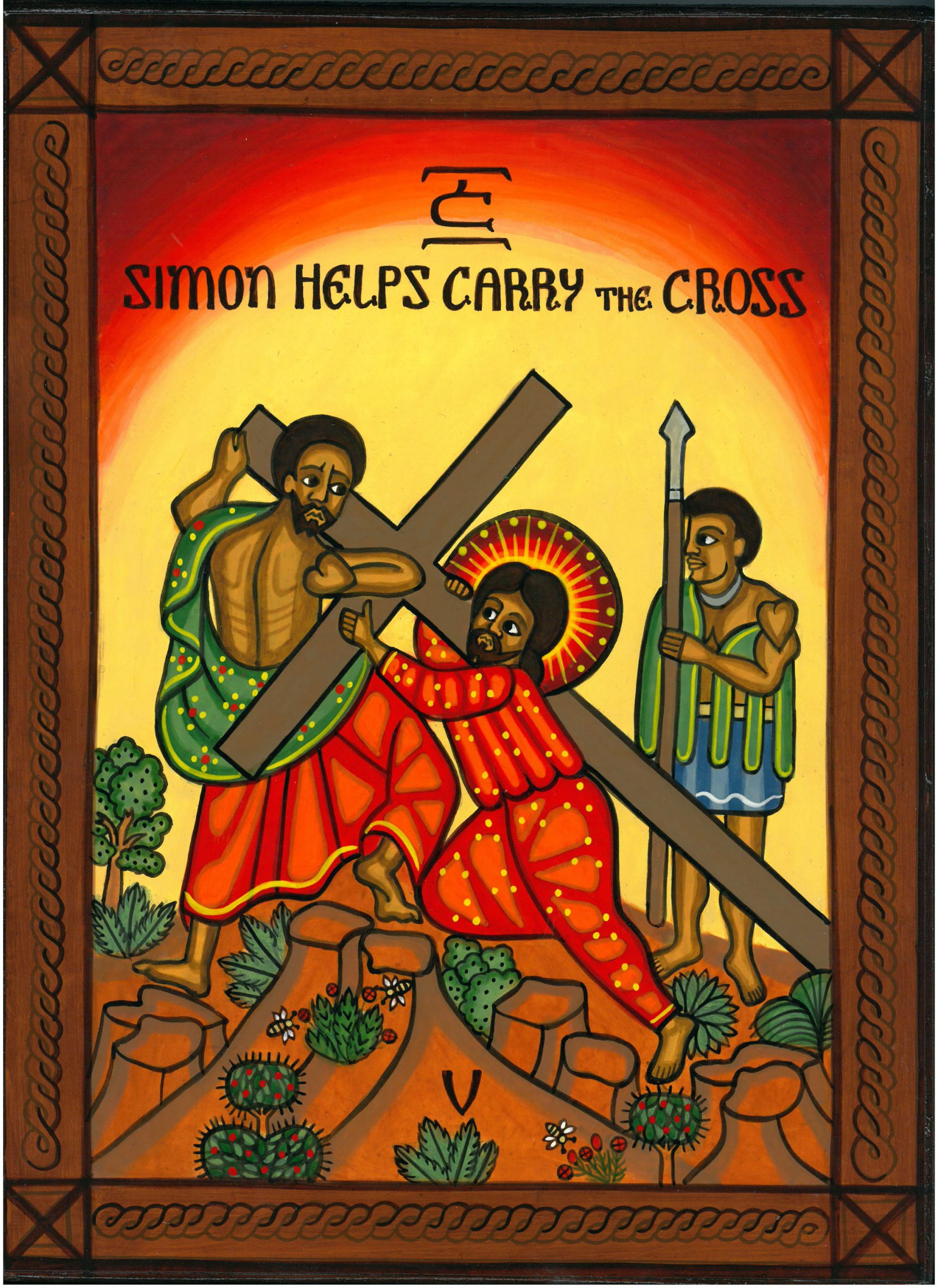 This Station shows the connection between Saint Augustine’s University and Saint Ambrose Church.  The Rev. J. Brinton Smith founded both institutions. The first to educated recently emancipated enslaved Africans in 1867. The second as a place for worship and Christian spiritual formation in 1868.  Blessed Anna Julia Cooper is a saint in The Episcopal Church. She was a graduate of Saint Augustine’s University and a member of Saint Ambrose. She gave a stained glass window depicting Simon of Cyrene carrying Jesus’ cross in the chapel of Saint Augustine’s in honor of her late husband, the Rev. George A.C. Cooper, who one of the clergy people to lead Saint Ambrose. This icon shows that connection since Simon of Cyrene is in the same position as in the stained glass window. The reason Simon of Cyrene’s head appears to be rotated to a position physically impossible is because both of Simon’s eyes must be visible in the Ethiopian tradition to communicate his holiness. There are three bees on the plants in the lower third of the icon. That is a reference to Saint Ambrose of Milan (339 C.E.-397 C.E) According to tradition, bees landed on his face as a child, leaving honey on his lips. He was a gifted orator, earning him the name “the honeyed tongue preacher.” The bees and the beehive are historic symbols of Saint Ambrose.  Ambrose’s preaching was an important factor in helping convert the African, Saint Augustine of Hippo, who influenced the development of Western Christianity. Ambrose’s feast day is December 7.

Jesus Dies on the Cross 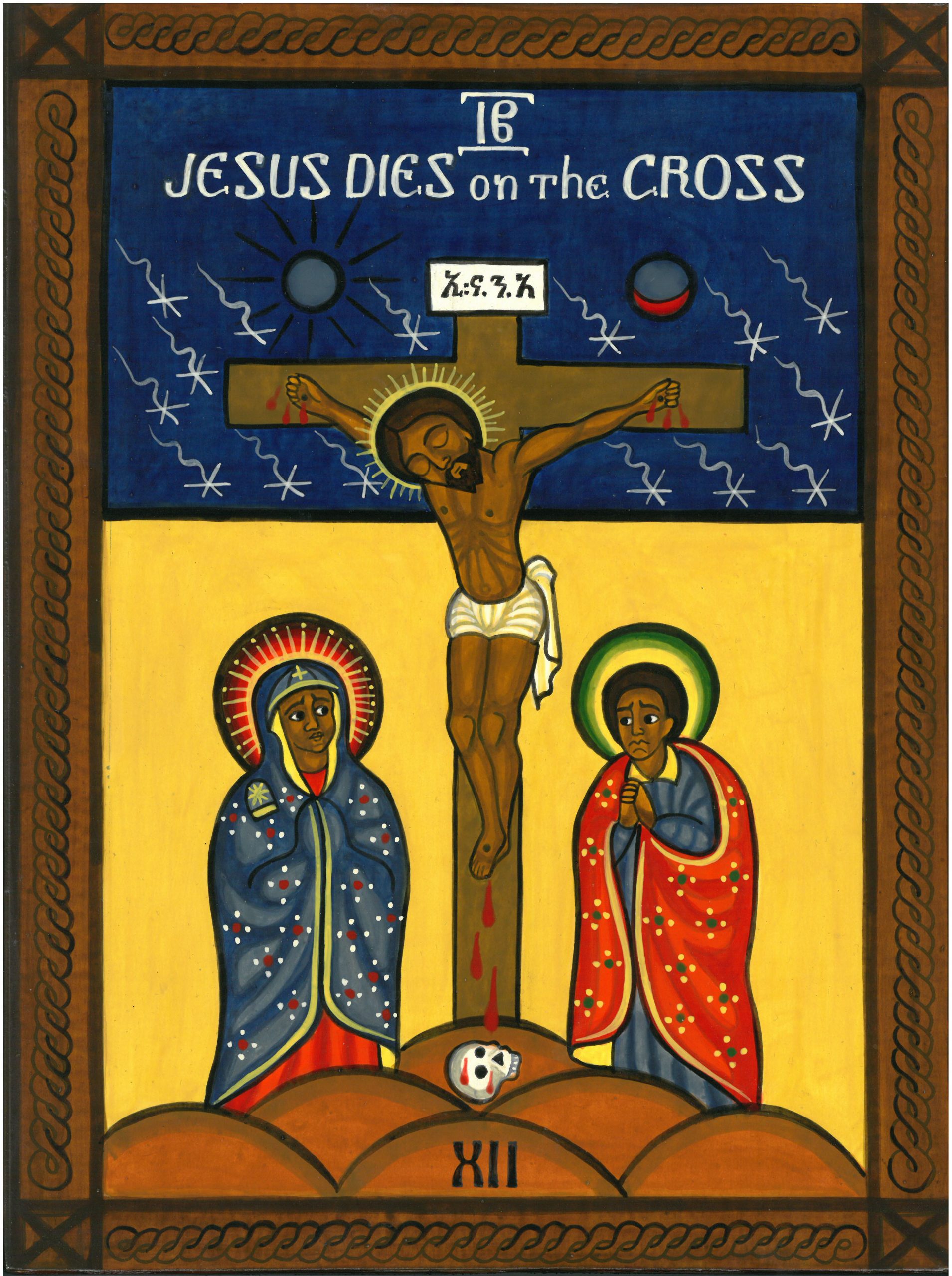 This Station depicts Jesus dying on the cross. The place of Jesus’ death is the Place of the Skull, called Golgotha. Golgotha means skull. It was a rocky hill that resembled a skull when viewed from a distance. Under the base of the cross is a human skull underground and buried. Christian tradition has it that Adam, the one God created on a Friday in the book of Genesis, is buried at Golgotha, the place the Romans crucified Jesus on Good Friday. The Crucifixion was near Adam’s tomb. God redeemed humanity through the cross.  In Genesis, God creates humanity of the sixth day, Friday, and calls humanity very good. Jesus Christ dies on the sixth day, Good Friday, to redeem what God first called “Very Good.” I Corinthians 15:45 reminds us, “’The first man, Adam, became a living being’; the last Adam [Jesus] became a life-giving spirit.” The wooden cross of Jesus, the tree of life, growing from the tomb of Adam who sinned and ate from the tree of knowledge. A redemptive tree grows from a skull. It is Jesus’ blood flowing to the skull that helps bring life to Adam’s skull, symbolizing all of humanity.

The Blessed Virgin Mary and the Beloved Disciple are the foot of the cross. The stars are falling. The moon turns blood red, and the sun is black (Revelation 6:12).

The image at the top of each icon is the Ethiopian numeral corresponding with the Station. The Roman numeral is at the bottom.

The border around each icon contains the wanfit or sieve design, which is common in the Middle East and East African regions. This design represents the foliage from the Tree of Life. (Genesis 2:9 and Revelation 22:2) This sieve design influenced the familiar Celtic braiding.

While preaching one Sunday, Father Jemonde Taylor held up a newspaper in his left hand, saying, “This is news.” He then held up a Bible, saying, “And this is Good News.”

This illustration points to the Reverend Jemonde Taylor’s preaching philosophy. He looks to current and world events with the goal of helping others see the gospel of Jesus Christ. You may listen to sermons at Saint Ambrose by using the playlist below or click the PLAY button for additional details.